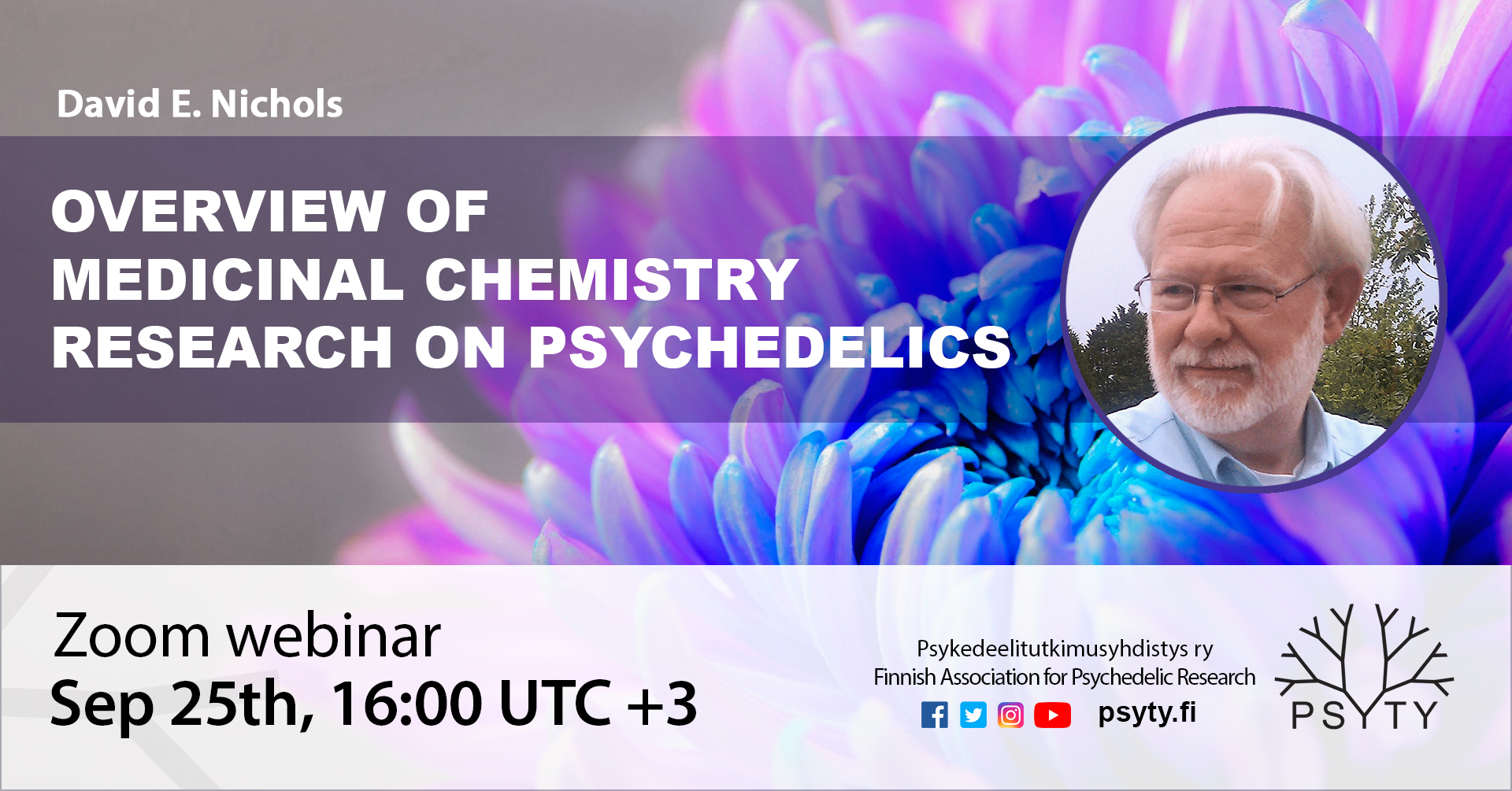 When psychedelics were criminalized at the turn of the 1970s, most research on them also came to a halt. Yet, some avenues of study still remained open. Veteran of psychedelic research, pharmacologist and chemist David E. Nichols, PhD, has been researching psychedelics since 1969 – over the course of seven decades. On Saturday, September 25th, at 4PM UTC+3, Nichols will present a webinar lecture organized by Psykedeelitutkimusyhdistys ry (Finnish Association for Psychedelic Research). The lecture offers a rich overview of psychedelics with an emphasis in medicinal chemistry. Topics covered include:

The session will help get a better grasp of the growing interest in the broad field of psychedelic research. The lecture provides non-technical information accessible to the general public, but will also delve deeper into chemical and pharmacological details. The event includes a presentation and discussion with questions from the audience.

In case you might want to mark your calendar, our next international webinar with psychiatrist and psychotherapist Peter Gasser is scheduled for November 11th.

David E. Nichols, PhD is currently an Adjunct Professor in the Eshelman School of Pharmacy at the University of North Carolina, Chapel Hill, NC. He is a Distinguished Professor Emeritus at the Purdue University College of Pharmacy and was the Robert C. and Charlotte P. Anderson Distinguished Chair in Pharmacology, where he carried out teaching and research for 38 years prior to his retirement in 2012. In 2004 he was named the Irvine H. Page Lecturer by the International Society for Serotonin Research, he received the first Purdue Provost’s Outstanding Graduate Mentor award in 2006, and was named a Distinguished Alumnus by the University of Iowa College of Pharmacy in 2012.

He began studying psychedelics in 1969 while a graduate student and continued that research throughout his entire professional career, being one of only a few investigators able to research psychedelics after they were scheduled. In 1993 he founded the Heffter Research Institute (HRI), which funded the first rigorous clinical studies of psychedelics in humans after a nearly 40-year moratorium and served as its president for more than 25 years. HRI funded the groundbreaking Phase I and II studies of psilocybin for the treatment of depression, as well as substance use disorders.

Dr. Nichols also synthesized the DMT used by Dr. Rick Strassman in his human studies, the MDMA that MAPS used for their Phase I and II clinical trials for PTSD, and the psilocybin used by several investigators for human clinical studies including the Phase I and II trials conducted at Johns Hopkins University by Roland Griffiths and his colleagues. He is considered the world’s leading expert on the chemistry of psychedelics. Dr. Nichols, although officially retired, remains active in the field through consulting and collaborations with several academic and pharmaceutical organizations and continues to publish scientific papers.